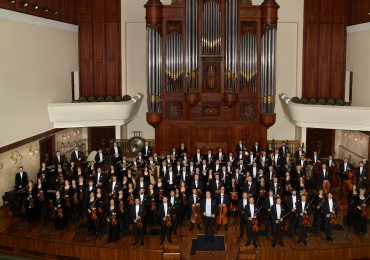 The Tatarstan National Symphony Orchestra has achieved worldwide acclaim for its sophisticated performances and dynamic programs. The orchestra was the inspiration of Nazib Zhiganov, former Chairman of the Composers Union of Tatarstan and Dean of the Kazan Conservatory. On the initiative of Zhiganov and Tabeev, the first secretary of the Tatar regional committee of the CPSU, conductor Natan Rakhlin was invited to Kazan. After his death in 1979, Renat Salavatov, Sergey Kalagin, Ravil Martynov, Imant Kotsinsh have worked with the orchestra. In 1985 Fuat Mansurov, the People’s Artist of Russia and the Kazakh SSR, was offered to be an artistic director and chief conductor; he has worked with the TNSO for 25 years. In 2010, after the death of Fuat Mansurov, the Honored artist of Russia (People’s Artist of Russia since 2016, People’s Artist of Republic of Tatarstan since 2020) Alexander Sladkovsky, with whom the Tatarstan National Symphony Orchestra opened the 45th concert season, was appointed the new Artistic Director and Chief Conductor.

The orchestra has entered a new phase since Maestro Sladkovsky came. Organized by the TNSO and Alexander Sladkovsky international music festivals such as Rakhlin Seasons, Miras, White Lilac, Kazan Autumn, Concordia, Denis Matsuev Meets Friends, International Organ festival and Creative Discovery are considered ones of the most prominent events in cultural life of Tatarstan and Russia. The orchestra runs the project “Property of the Republic” for talented pupils from music schools and conservatory students; the educational project for Kazan school pupils “Music lessons with an orchestra” and the project “Healing through music” for seriously ill children.

In 2016 in cooperation with the Melodiya record label several global musical projects were realized: the recording of three symphonies of G. Mahler (Nos. 1, 5, 9) and all symphonies and concertos of D. Shostakovich. In May 2020, the digital release of the “Tchaikovsky-2020” box set took place — a recording of all symphonies and instrumental concerts by P. I. Tchaikovsky on the Sony Classical label. In August 2020, the TNSO under the direction of Alexander Sladkovsky recorded symphonic works by S. Rachmaninoff on the Sony Classical label. March 2021 concerts-presentation of the box set «Sergey Rachmaninoff. Symphony Collection» will be held in Moscow, St. Petersburg, and Kazan.

The Tatarstan National Symphony Orchestra under the direction of Alexander Sladkovsky is currently the first and only regional orchestra that has been honored to have its own annual subscription in the Moscow State Philharmonic Society.