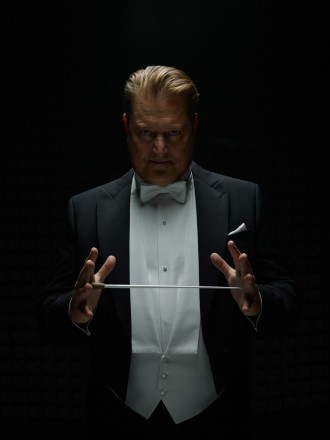 Russian conductor, People’s Artist of Russia Alexander Sladkovsky graduated from the Moscow and Saint Petersburg conservatories. He is a winner of the III International Prokofiev Competition. In 2001, he conducted in a concert at the Hermitage Theater in honor of the visit of Her Majesty Queen Beatrix of the Netherlands. He assisted Maris Jansons and Mstislav Rostropovich and from 2006 to 2010 he was a conductor of the New Russia State Symphony Orchestra under the direction of Yuri Bashmet. Since 2010 Alexander Sladkovsky is an Artistic Director and a Chief Conductor of the Tatarstan National Symphony Orchestra in the city of Kazan (Tatarstan, Russia), which he transformed into one of the finest orchestras in Russia.

Working with the Tatarstan National Symphony Orchestra for nine years, he has significantly enhanced the status of the orchestra in the musical life of the Republic of Tatarstan and the whole country. He expanded range of its creative capacities, effectively putting into practice the latest formats of professional work of international level. Concerts featuring TNSO under the direction of Alexander Sladkovsky are very popular in Tatarstan, and every performance is usually sold out. Perm, Omsk, Tyumen, Irkutsk, Saint Petersburg and Moscow are among those Russian cities, where Sladkovsky and his orchestra are known and appreciated.

In April 2014, the TNSO under the direction of Alexander Sladkovsky performed at the UNESCO headquarters in Paris at the ceremony, where Denis Matsuev was awarded with the title of “Ambassador of Good Will”. In the 2014/15 concert season, Alexander Sladkovsky with the TNSO performed at the Bolshoi Theater of Russia during the concert, dedicated to the 10th anniversary of the Crescendo festival, and in Saint Petersburg within the first orchestra’s subscription at the Mariinsky Concert Hall.

Alexander Sladkovsky is the founder and the artistic director of the Rakhlin Seasons, Miras, White Lilac, Kazan Autumn, Concordia, Denis Matsuev Meets Friends and Creative Discovery festivals. In 2012 Sony Music and RCA Red Seal released a three CD album entitled “Anthology of music by composers of Tatarstan” and a CD “Enlightenment”. In 2016 in cooperation with the Melodiya record label several global musical projects were realized: the recording of three symphonies of G. Mahler (Nos. 1, 5, 9) and also recordings of all symphonies and concertos of D. Shostakovich. In spring 2020 recordings of all Tchaikovsky's symphonies and concertos will be released by the Sony Classical label.

The Tatarstan National Symphony Orchestra under the direction of Alexander Sladkovsky is currently the first and only regional orchestra that has been honored to have its own annual subscription in the Moscow State Philharmonic Society.

In June 2015 Maestro Sladkovsky was awarded the medal of the commemorative badge “Nikolai Rimsky-Korsakov”, and in October 2015, the President of the Republic of Tatarstan Rustam Minnikhanov presented him the order Duslyk (Friendship) In 2016, Alexander Sladkovsky was awarded the prize “Conductor of the Year” by the national newspaper The Musical Review and “Person of the Year in Culture”, according to the magazine Delovoi kvartal and the online newspaper Business Online.